This is joint work done with my advisor Günter Stolz.

The following video shows the level statistics of the eigenvalues of a random operator. Read on for a full explanation of what can be seen.

The most important object in the quantum mechanical description of physical systems is the Hamiltonian \(H\). In mathematical terms, the Hamiltonian is a self-adjoint operator in a Hilbert space. The spectrum of \(H\) gives the possible energies which the physical system can have, while the eigenfunctions of \(H\) correspond to the states of the system. Moreover, the solution of the time-dependent Schrödinger equation \[ H \psi(t) = i\frac{d}{dt} \psi(t), \quad \psi(0) = \psi_0 \] describes the physical time-evolution of a system with initial state \(\psi_0\). Determining the spectrum, eigenfunctions, and time-evolution of a self-adjoint operator requires deep tools from functional analysis, operator theory, as well as spectral and scattering theory. Due to their applications in quantum mechanics, these areas of mathematics play important roles in theoretical physics and continue to be very active research fields.

Physical systems are often disordered. For example, physical materials such as crystals often have impurities (an example being given by diamonds). Electrons moving in such materials will be exposed to random forces. The Hamiltonians of such systems are modeled by random operators, with the historically first and most studied example given by the Anderson model. This model takes the form \(\eqref{discSO}\) with the values of the potential \(V(n)\), \(n\in \mathbb{Z}\), given by a sequence of independent, identically distributed (i.i.d.) random variables. One might say that the potential is generated by an infinite number of coin tosses.

While the Anderson model is the best understood example of a random operator, there are other models of random operators which are physically relevant and mathematically interesting (as well as challenging). Reaching a better understanding of one such model, the so-called random edge Laplacian, is the goal of our work. Below we introduce the one-dimensional version of this model, describe some of its known properties, and state some open problems and conjectures, which we motivate by numerical investigations. 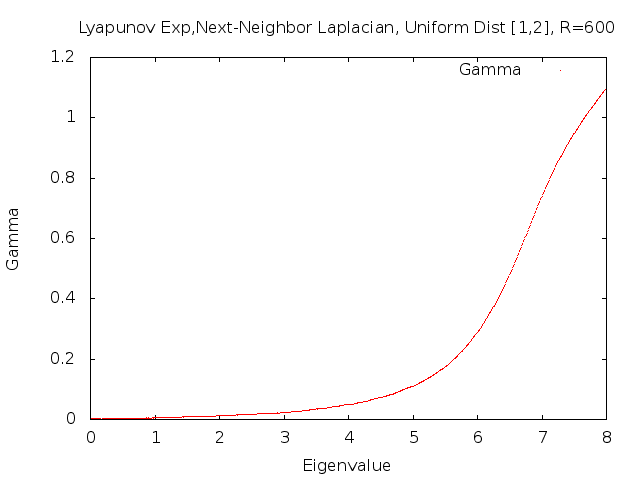 The graph suggests that the Lyapunov exponent is positive away from zero, but we would like a closer look at what happens as \(E\) goes to zero. The following graph is a magnification of the previous graph around zero. 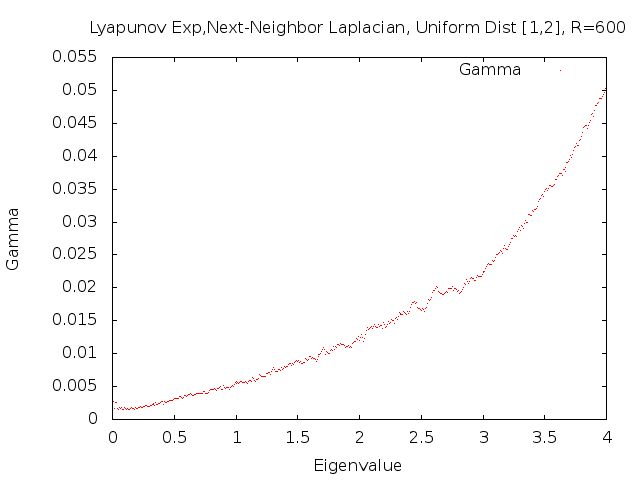 We are now reasonably sure that the Lyapunov exponent is positive for non-zero \(E\), but we can't be sure what happens for \(E=0\). This is where our numerical approach ends and we turn to analytical methods.

We can show via Fürstenberg's Theorem that \(\gamma(E)>0\) for \(E>0\). We can also show, through direct calculation using the modified transfer matrices, that \(\gamma(0)=0\). This is an important difference between this model and the Anderson model, where it is known that Lyapunov exponents are positive for all values of \(E\). Our next goal will be to determine how \(\gamma\) goes to zero as \(E\) goes to zero. In particular, we would like to show that the convergence is linear. 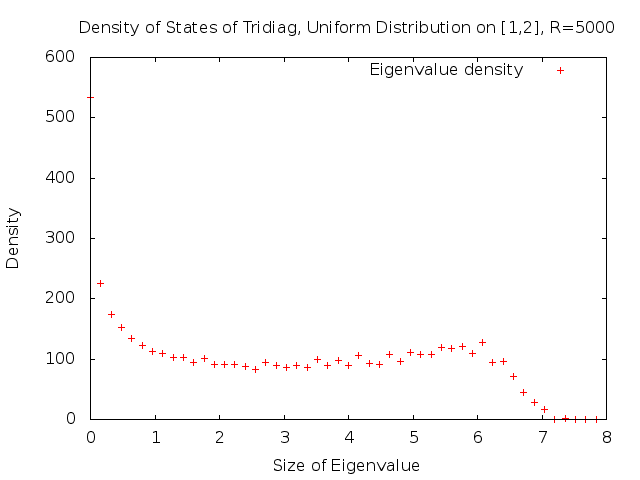 We can obtain a better graph by averaging the density of states of 100 independent trials. 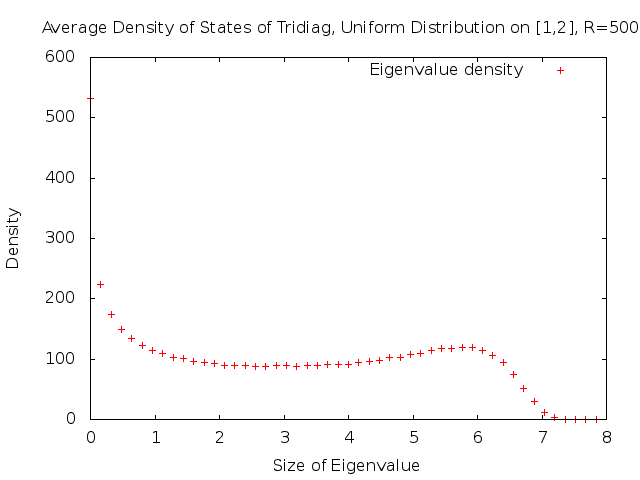 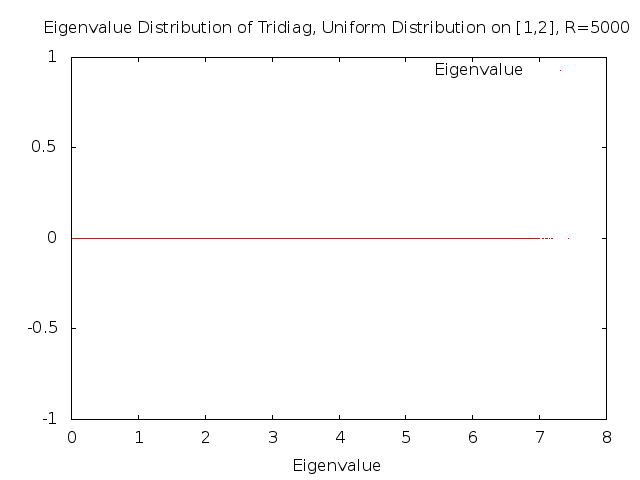 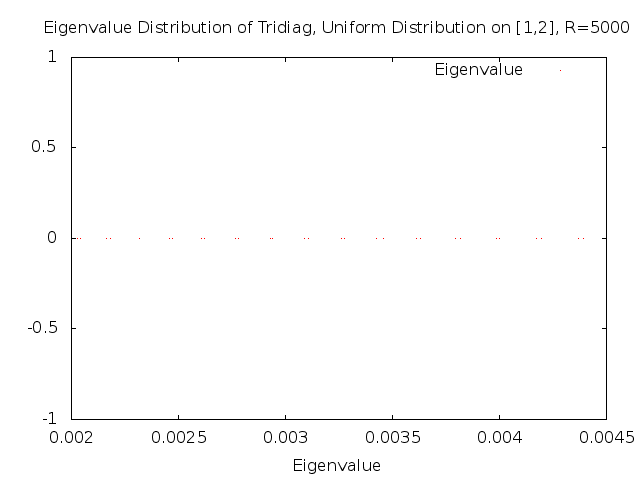 Continuing along the spectrum we can see that the pair structure which we saw before is now gone, but it isn't clear that the distribution of the eigenvalues has become random. 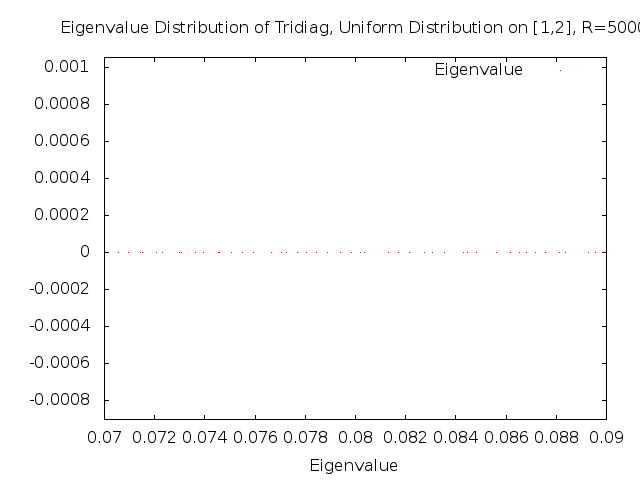 Further along the spectrum, the distribution of the eigenvalues appears to have become random. 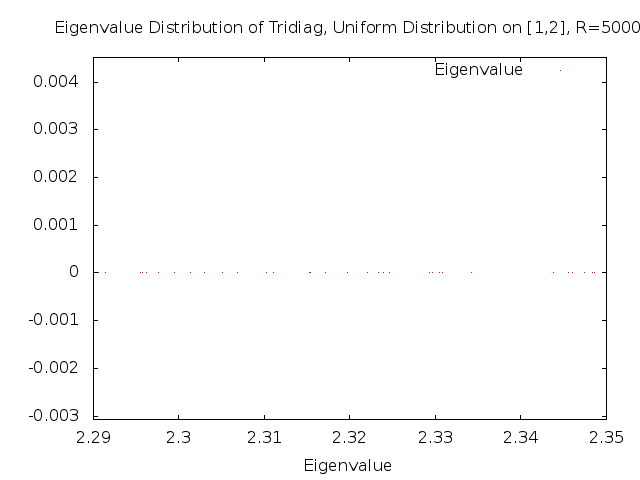 If the eigenvalues are regularly spaced, we will see histograms which look like delta peaks. If the eigenvalues are randomly spaced, the histograms will look like exponential decays. As you can see, very early in the video we see two peaks. These peaks correspond to the paired spacing we saw earlier. These peaks then seem to merge and the distribution appears to go through a transition period before becoming exponential decay.